Preliminary results from a large population study based on the Danish National Birth Cohort has found that paternal smoking is associated with lower total sperm counts and sperm concentrations independent of maternal smoking and other confounding factors (such as age, alcohol consumption or BMI). The study was carried out with funding from ReproUnion 1.0 and the results were presented by Dr Sandra Søgaard Tøttenborg at the 35th Annual Meeting of ESHRE in Vienna end of June.

“There have been previous studies investigating the association of paternal smoking with semen quality, but these were small studies without information on key confounders,’ said Dr Tøttenborg from Bispebjerg Frederiksberg Hospital, in Copenhagen, Denmark. ‘Our larger study does support these previous findings that paternal smoking is associated with sperm concentrations in male offspring independently of maternal smoking.”

The study was a follow-up analysis of 778 19-year-old young men born to mothers registered in the Danish National Birth Cohort between 1996 and 2002. Results showed that in the adjusted analyses the sons of fathers who smoked daily (and where the mothers did not smoke) had an 8% lower sperm concentration and 9% lower total sperm count than the sons of paternal non-smokers.

“Our results did show an association with paternal smoking,’ said Dr Tøttenborg, ‘but the effect of maternal smoking is much larger. If the mother but not the father smoked, the reduction was 26% for sperm concentration and 46% for sperm count. It’s certainly worse for the boys if the mother smokes. Nevertheless, the circumstances in which the father smokes but the mother doesn’t is much more prevalent, so this is still very relevant for public health. A decline in sperm count of 8-9% can seriously affect the fertility of men with already sub-optimal sperm quality.”

Following her presentation Dr Tøttenborg was interviewed live on ESHRE’s online channel and the news was amongst others featured by The Daily Mail. You can read the full press release and listen to the interview here. 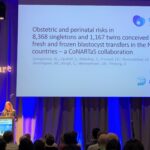 Previous:
Dr Spangmose was the first to present findings at ESHRE from a ReproUnion supported study 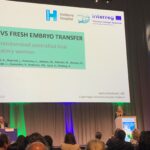 Next:
Dr Stormlund wins award for her presentation of the ReproUnion supported study “Freeze-all versus fresh embryo transfer in ART”