Home NewsVisiting professor at Lund University in the ReproUnion project

Visiting professor at Lund University in the ReproUnion project

Mary Familari, BSc (Hons), Dip. Ed. Ph.D., is currently at Lund University, Department of Occupational and Environmental Medicine as visiting professor involved in one of the ReproUnion research projects.

Following successful completion of her Ph.D., Mary spent 7 years at the NIH, Bethesda, MD, USA as a Fogarty Fellow where she developed her interest in embryonic development of the ovary and testis, and expertise in a range of cellular and molecular biology techniques. She became an Academic with teaching and research responsibilities in 2002 at the University of Melbourne, Australia. Her research projects have continued to focus on the development of various tissues – ovary, testis and trophoblast in mouse and marsupials You can read more about Mary’s research projects here

Mary has a continuing collaboration with Prof. Stefan Hansson at the University of Lund where she co-supervises Ph.D. students studying various aspects of human placental biology focusing on the cellular mechanisms that play a role in preeclampsia. More recently she became part of the EU-ReproUnion project ´The association between air pollution and preeclampsia´ headed by Dr. Ebba Malmqvist. Mary will study the role of pollution particles on primary human trophoblast cells. Having succeeded in developing a method to disperse the particles in culture media, her preliminary data shows that pollution particles can activate genes involved in initiating inflammation, which is considered a preliminary step in the development of preeclampsia.

Read more about Mary and her research on her personal website. 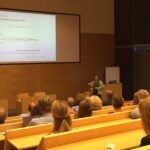 Next:
The first systematic review within ReproUnion funding is published