Background
Women undergoing in vitro fertilization receive high doses of the gonadotropin follicle stimulating hormone (FSH), sometimes in combination with the gonadotropin luteinizing hormone (LH), for stimulation of the ovaries to obtain a high number of eggs. There are marked individual differences in the hormonal response, ranging from lack of increased egg maturation to hyper stimulation. The hypothesis is that genetic variants in the gonadotropin receptors (LH and FSH receptors), are influencing the outcome. This assumption is supported by a recent study on more than 600 women undergoing in vitro fertilization, in which it was demonstrated that only 10% of women with asparagine in both genes (FSHR N680S and LHR N312S) became pregnant, compared to 40% success rate of those with serine (Lindgren et al. 2016).

Prospective part
The result regarding higher pregnancy rate for women with the serine variant in the FSHR N680S and LHCGR N312S positions was confirmed in a recent study where these women also had a nearly doubled chance of having a live-born baby after all completed IVF cycles, see graph below (Lindgren et al. 2018). 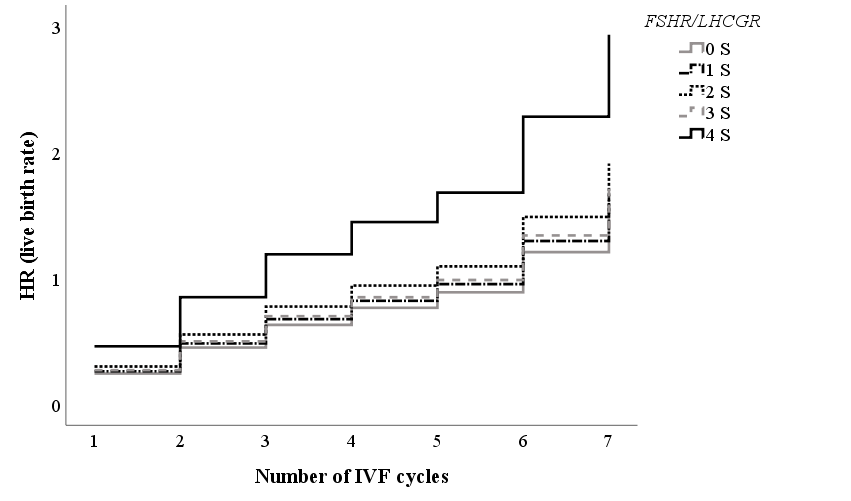 Cumulative hazard for live birth rate in relation to the number of S in FSHR N680S/LHCGR N312S. Graph from Lindgren et al. 2018.

Retrospective part
The retrospective part is based on a Danish IVF cohort at Rigshospitalet. All the women were stimulated with either of the two compounds. The clinical outcome is well defined, and genotyping of relevant polymorphisms has been performed. The different genotypes define subgroups of women. The groups are compared with type of stimulation and success rates. Work with this study is ongoing.

Genetic variant and influence on OHSS
The genetic variants have also been studied in relation to risk of developing ovarian hyper stimulation syndrome (OHSS) during IVF treatment. It was found that women with the asparagine (N) variant in FSHR N680S had a higher risk of developing OHSS. This could indicate that the N FSHR variant in N680S has a higher activity, leading to a higher response and development of OHSS. This theory was tested in vitro in a cell based system and there was a difference in receptor activity depending on the genotype of the FSHR (Nenonen et al. submitted, under revision).

See all science projects within ReproUnion