The ReproUnion footprint on ESHRE 2019 could not be missed!

End of June 2019 the European Society of Human Reproduction and Embryology (ESHRE) held their 35th annual meeting in Vienna with 12.000 registered participants. It was a busy conference with up to six parallel presentation sessions, the ESHRE Village and a full exhibition hall.

The footprint of ReproUnion 1.0 was evident when listening to seven Post docs/Ph.Ds present their findings from studies funded by ReproUnion during the project period 2015-2018. Three of these studies were covered by the seven press releases ESHRE issued during the conference and the findings were picked up by international media such as the Mirror and the Daily Mail.

Sasha Stormlund not only impressed the audience but also received ESHRE’s Clinical Science Award for her oral presentation showing that success rates after freezing all embryos for later transfer is no better than with fresh transfers. In the same session Claudia Tomas also reported on pregnancy and perinatal outcomes from a study of 521 fresh and frozen cycles.

Kristina Wendelboe Olsen presented surprising results showing that human granulosa cells have a much younger DNA methylation age than other adult tissues and at the same time in another session, Sandra Søgaard Tøttenborg reported preliminary results from a large population study about the effect of paternal smoking on semen quality of adult sons. 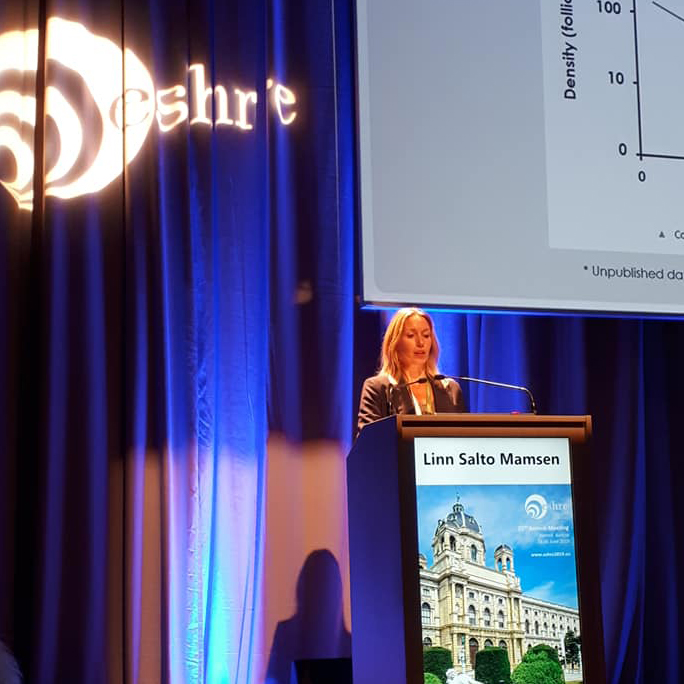 ESHRE ran 17 congress courses ahead of the official opening with Søren Ziebe lecturing on ‘From gamete to embryo – competence and pitfalls’ and Eva Hoffmann lecturing on ‘Aneuploidies in human gametes and embryos’. Søren heads up challenge 5 in ReproUnion 2.0 and is on ReproUnion’s Executive Board as is Eva and Stine Gry Kristensen, who presented in the EHSRE session Novel insights in PCOS.

Eva Hoffmann is part of challenge 3 in ReproUnion 2.0 from which Jesus Cadenas presented the first results showing new data on improvement of human IVM. Claus Yding Andersen is leading challenge 3 and he also advised on several of the research projects in ReproUnion 1.0, including the one Linn Salto Mamsen presented data from. Her presentation on fertility preservation in rare genetic diseases received a lot of attention.

ReproUnion’s challenge 2 is headed by Anja Pinborg who was also adviser on three of the above-mentioned studies presented at ESHRE. Anja also co-chaired the RCT latest news session and supported activities in the popular ESHRE Village. Furthermore, Anja Pinborg sits on ESHRE’s Executive Board and is thereby part of the planning committee when ESHRE comes to Copenhagen in July 2020.

“We have started planning ReproUnion’s involvement in ESHRE next year and are open to ideas on how to best showcase our five challenges as well as the intention to collaborate more with the industry,” says Mette Bach Dyremose who joined the ReproUnion team as Communication Manager in May 2019. Mette was thrilled that it was possible to gather the ReproUnion team for a photo in Vienna: “The impressive results generated in the last project round got a very pleasant human touch when the group came together for a photo”.